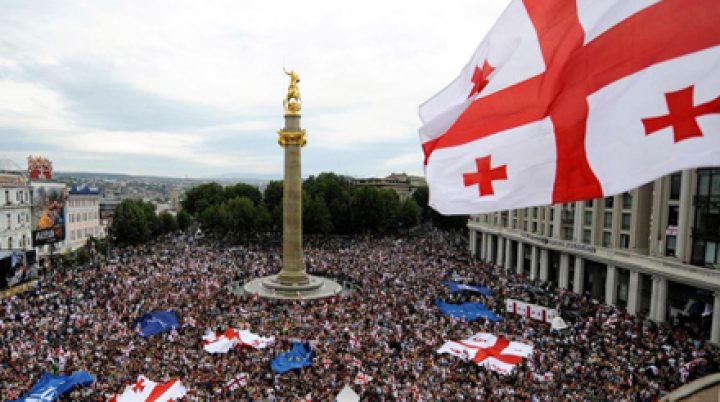 Two weeks ago an event took place at the posh offices of a prominent Washington law firm with an incredible view of the nearby White House. But the discussion had little to do with U.S. presidential politics. Hosted by the America-Georgia Business Council, the high-powered conference focused on a single subject: the strategic impact of the Chinese New Silk Road project on the economies and geopolitics of Georgia, Central Asia and Eastern Europe. Assembled for the conference was group of prominent American and foreign scholars and government officials led by the distinguished American historian on Central Asia and the Caucasus, S. Frederick Starr; geopolitical guru S. Enders Wimbush; the head of Georgia’s central bank, Koba Gvenetadze; and key officials of British Petroleum (BP), the Overseas Private Investment Corporation (OPIC), and the State Department, as well as representatives from virtually every Central Asian country and Afghanistan.

So, what exactly is the New Silk Road and why is the little country on the eastern shores of the Black Sea considered an essential part of it? The New Silk Road, better known in China as the One Belt, One Road (OBOR) or simply Belt and Road (B&R) initiative, is a Chinese plan to refashion the legendary trade routes across Eurasia, from Europe to China, crossing all of Central Asia and the Caucasus.  China sees great advantage to itself, of course, but most countries forming parts of the B&R—and all of Europe—are expected to benefit from it. It consists of a land trade corridor and a maritime route that both end in Europe and are designed to speed up and facilitate trade with China and Asia beyond. The land corridor aims to cut delivery times by train from 36 days to 10 days and make it highly competitive with maritime transport.

To the extent that the B&R has the potential transform much of Eurasia, it resembles the old silk road of antiquity that for centuries served both Chinese trade and imperial interests. It is a major Chinese strategic initiative that would have significant geopolitical implications for all countries involved. As designed and advertised by Beijing, the New Silk Road is indeed a massive undertaking. It envisages major infrastructure building—roads, rail, ports and communications along the B&R—with the Bank of China alone pledging to spend $120 billion between 2015 and 2019. Additional tens of billions are expected to come from the Asian Infrastructure Investment Bank and from a special $46 billion Silk Road Fund set up for the purpose by the Chinese government.

It is, of course, far from a charitable exercise. Observers have noted that the Beijing initiative comes at a time when the Chinese economy has slowed down considerably, even if one were to believe official statistics, creating in the process huge overcapacity in a number of heavy industry, construction and export sectors. Nor is it guaranteed that the generous Chinese investment promises will necessarily come to fruition. Debt to GDP ratios in China have ballooned from 150% to 260% in the past decade, and it now takes four borrowed yuans to generate 1 yuan of additional GDP, according to The Economist. Hardly the picture of a robust financial system.

Nonetheless, the geopolitical and economic rationale behind building a faster and cheaper corridor for delivery of Chinese goods to Europe and vice versa is powerful and unmistakable, and Beijing is not likely to be swayed from it. Most of the efforts to date have been centered on Central Asia, where China already dominates economically, and on the southern Caucasus and Eastern Europe, where it would like to augment its economic power.

The one large regional player that is conspicuously missing from B&R to date is Russia. That despite much Chinese and Russian verbiage to the contrary. In 2014, stung by Western sanctions following its aggression in Ukraine and Crimea, Putin announced a historic ‘pivot to the East’ that was to make China Russia’s main economic partner and source of investment in return for massive supplies of gas and other raw materials. A promised Russian supply of $400 billion worth of natural gas to China was supposed to secure Chinese investment of up to $100 billion for the building of a pipeline called the ‘Power of Siberia’ across Siberia and into eastern China, and another one, the ‘Altai’ pipeline, into western China. Today, two years later, none of the promised Chinese investments in Russian pipelines and infrastructure have materialized, and given the success of the U.S. shale revolution and the collapse of gas prices worldwide it is certain that they will not any time soon.  The sad truth for Moscow is that Russia is much more dependent on China than the other way around. Not a good situation for a country with great power ambitions.

This may be, at least in part, the reason Georgia is both an eager participant in B&R and a desirable partner for the Chinese. Having become the first victim of Moscow’s aggressive expansionism in 2008 and losing 20% of its territory in the process, Georgia remains staunchly pro-Western and an eager candidate for full membership in both the European Union and NATO. This is the place to mention that Georgia’s recent parliamentary elections of October 8 resulted in a landslide victory for the Georgian Dream (GD) ruling party and solidified popular support for its demonstrably pro-Western course. It was a strong endorsement of GD’s policies that have secured an Association Agreement and a trade agreement with the EU and further integration with NATO. Although many Georgians are impatient that their strongly pro-Western policies are not bringing faster integration in the Western community, the likely introduction of visa-free travel for Georgians in the EU by the end of 2016 will be a palpable step forward.

Perhaps as important for Georgia’s future is the failure in the elections of pro-Russian elements to make any headway. While in 2013 and 2014, pro-Russian parties regularly scored double-digit electoral support, this time the most prominent of them, the Alliance of Patriots, a populist anti-Western party with some pro-Russian members, barely reached the 5% threshold to send several representatives to parliament; while Nino Burjanadze’s so-called “neutrality” party, the undisguised pro-Russian Democratic Movement-United Georgia, could do no better than 3.5% and will not be represented. Finally, it is noteworthy that despite Russia’s unabashed hostility, Georgia has maintained remarkably liberal and open pro-market policies that have resulted in high per capita GDP growth rates for the past 10 years, including 20% per capita growth since the GD came to power in 2012.  This high growth rate is forecast to continue for the foreseeable future. Georgia is on its way to becoming a prosperous country.

Georgia’s participation in the New Silk Road is seen as a positive step by the EU and should be welcomed by the United States, although, as Professor Starr pointed out, Washington has yet to embrace the Caucasus or Central Asia in a larger strategy for advancing its own interests. For Tbilisi, participating in a major international infrastructure undertaking promises not only economic benefits, but also an additional measure of security; any renewed aggression by the Russians would likely be seen as an assault on Chinese economic interests as well.

Georgia has been eager to participate in all kinds of transnational infrastructure projects, from the Southern Gas Corridor with Azerbaijan and Turkey, to Poti’s ferryboat links with EU members Bulgaria and Romania and the New Silk Road deep sea port at Anaklia on Georgia’s Black Sea coast, which will make possible the handling of even the largest container ships and is expected to process 100 million tons per year. Further, Georgia has proposed to build two large tunnels on the railway link Baku-Tbilisi-Kars (Turkey) speeding deliveries by up to 50%. Recently, a train composition starting from Urumchi in western China made it to Georgia’s port of Poti in just seven days, demonstrating the potential of B&R. One eloquent example of Georgia’s Silk Road orientation and, conversely, the appreciation by others for this orientation is the unprecedented growth of Tbilisi (and Kutaisi and Batumi) air connections to other B&R destinations, such as Kazakhstan, Turkmenistan, Iran and Eastern Europe, apart from regular flights to Beijing. London’s The Telegraph just named Tbilisi a ‘top travel destination.’

Ultimately, Georgia’s future and that of the B&R initiative lie in closer integration with the Eastern European countries on the other side of the Black Sea, most of which are already members of the EU and NATO or aspire to be, despite Russia’s desperate efforts to prevent them.  Beginning in April 2012 with a conference on B&R organized by Chinese prime minister Wen Jiabao in Warsaw, the Chinese have been exceptionally active in cultivating Eastern European participation. This has already resulted in an informal organization of Central and Eastern European countries and China, called 16 plus 1, that meets at least once per year to discuss B&R plans. Georgia would seem a natural member for this group.

Practical results have emerged quickly. Following the acquisition by the Chinese of the port of Piraeus in Greece in 2010, B&R proposed a high-speed rail line between Athens and Budapest and is currently financing a new bridge across the Danube in Serbia. Regional B&R initiatives between Chinese provinces and Eastern European countries already flourish. As an example, a rail road link between Chengdu in China’s Sichuan province and Lodz/Klutno in Poland dubbed ‘Chengdu-Europe- plus’ delivers more than 400 freight trains per year to central Poland. To no one’s surprise Chinese exports to Eastern Europe have been growing by 30% per annum lately and the latter’s exports are steadily rising as well.

The New Silk Road is no longer just a dream. Georgia is set to become a critical lynchpin between Asia and Europe, and an essential foundation for the project’s success.