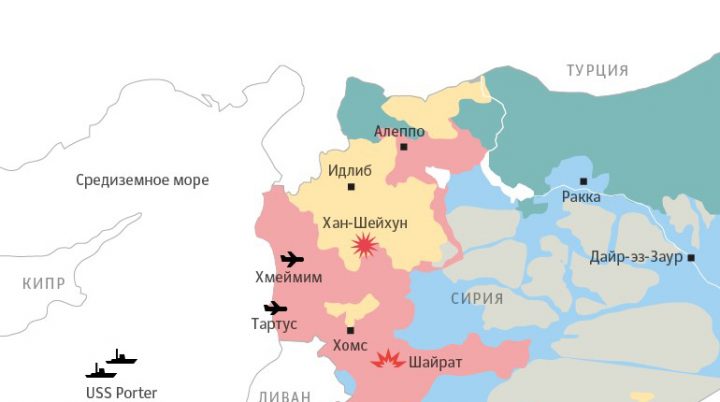 One of the most humiliating moments for Russia in the US Navy’s Tomahawk cruise missile attack on the al-Shayrat Syrian Air Force base is that the Kremlin had reassured the world that it controls the skies over Syria thanks to the deployment of the S-400 and S-300 air defense systems. This, the logic went on, allowed it to call the shots and enforce compliance with its interests in the air above the territory controlled by Assad’s loyalist troops.

According to claims by top brass in Moscow, the systems provided reliable protection against US cruise missiles and stealth technologies.

Russia had reassured both President Assad and the world that it is capable of protecting not only its own bases in Syria, but also Assad’s planes bombing the opposition.

Recently, the Israeli Air Force challenged this security warranty and proved it rings hollow. Israeli aircrafts were able to pierce through the “reliable” Russian air defense, inflicting serious damage not only to Assad but to Moscow’s reputation.

Since the cruise missiles struck, the Kremlin has struggled to come up with a credible response and action to repair its reputation. Russian propagandists tabled different media interpretations desperately trying to preserve the honor of their top air defense weapon, the S-400, in the eyes of both the Russian public and its partners, including prospective buyers and owners of Russian air defense systems.

Finding it difficult to base its narrative on reality the Russian official media had to recourse to “alternative facts.” The respective digits and the name reflect the purported range of the missiles and the radar of the S-400 and S-300, respectively covering 250 km and 300 km. The map above, found on a BBC site, closely replicates official data provided by the Russian manufacturer and shows that the Russian S-400 system covers almost the whole territory of Syria, as well as all of Lebanon, the southern regions of Turkey and northern Israel. In any case the S-400 should cover substantial chunks of the area in the Mediterranean from which the two US Navy frigates launched the Tomahawk missiles, as well the entire flight track on Syrian territory to the al-Shayat air base.

Moscow’s first move was to gain time giving priority to diplomatic verbiage at different levels and locations, focusing on the legality of the US action. Blame assigning phrases, which have been addressed to Russia regarding the invasion of Ukraine, such as “act of aggression”and “violation of international law”, dominated the talk.

There is no doubt that the chemical attack in the Idlib province caught the Kremlin off guard. The hasty narrative challenging the main line of Assad’s involvement gained momentum, focusing on the rebels and their past record with chemical weapons. President Putin tried to seek an escape route using the term “incident”, which has a specific meaning, to describe the gas attack. He seemed ready to concede a role for Assad or his proxies, but preferred to interpret the case as a random, isolated, non-criminal act.

The Kremlin seemed in desperate search of a last minute attempt to pre-empt a US strike as it did four years ago, convincing the Obama administration not to root out the Assad regime. However, the main defense line, maintained by the Ministry of Foreign Affairs and the Russian military, persisted in the media – the nerve gas sarin was not in the bombs but in the warehouses hit.

The diplomatic offensive led by minister Lavrov could achieve little to avert the humiliation to the reputation of the Ministry of Defense and the Russian military in general, which are the ultimate guardians of Vladimir Putin’s power and his geopolitical leverage.

To add insult to injury, the US military made it clear, that the Russians had been warned in time, so as to avoid Russian casualties, yet they were unable to detect and protect Assad.

The reputational damage to Russia seems difficult to ignore and beyond imminent repair.

The Tomahawk cruise missiles successfully penetrated the S-400’s defenses, making a mockery of Russia’s military guarantees that formed the base for the Syria deal – protection of Assad in return for Russian military bases. A knock-on effect is imminent both in Russia and abroad. The trust and confidence of Russia’s partners relying on the Kremlin’s security guarantees and Russian military equipment has been shattered. Snap drills were called to test Russian air defense systems to detect and destroy incoming cruise missiles. What happened in Syria could happen anywhere.
The Syria showroom for Russian weapons closed doors and the marketing premium is gone.

Faced with a mission impossible, Moscow decided to redo the narrative of the S-400 capabilities and offered an “upgraded” interpretation of what happened and why its air defense systems deployed in Syria remained silent. Moscow’s media strategists conveniently shortened the operations range of both systems to one tenth of their original reach – a 40 km radius around the Russian air base in Khmeimim for the S-400 deployed and 30 km/S-300 for the naval base in Tartus. This map, taken from the RBC Daily site, epitomizes this new propaganda line.

The realignment of the respective ranges of the two systems addresses the need to provide a credible explanation. The Russian counteroffensive went further on to satirize the effectiveness of the US cruise missiles strike, emphasizing the poor success rate in reaching and destroying the ultimate target. In the eyes of the top Russian military ranks and weapon manufacturers this is overdue revenge for the western media ridiculing the first Russian cruise missiles launched from frigates in the Caspian Sea against targets in Syria – in which just a small number reached Syrian territory.

The Russian Ministry of Defense order renewed intensive strikes against targets in the Idlib province immediately after the US cruise missile hit on the Syrian air force base trying to make up for the lost air power of the Assad regime.

As the air strikes of the Israeli Air Force and the latest US attack on Assad’s air base have clearly proved, Russia does not have the military means to detect and counter the superior US weapons systems, making the Russian security guarantees issued at home and abroad null and void.

President Trump has made one thing certain – he is not Obama and his domestic agenda overrides expectations President Putin might have vested in him.