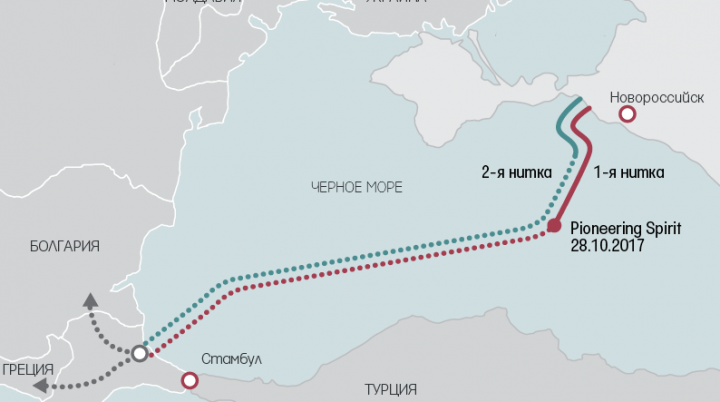 The daily Vedomosti published an article on Turkish Stream, quoting Foreign Minister Lavrov on the need for direct EC guarantees and second rating bilateral agreements, signaling  rising nervousness at the Kremlin with the project advance. It is a most revealing moment for what Russia and its main energy pivot – Gazprom – can afford these days in defying market gravity, while leveraging the Kremlin’s geostrategic moves. Russia’s gas monopoly admitted in June that it is unable to raise project financing – neither in Russia, nor abroad. The new sanctions left Gazprom without a choice but to tap into its own pocket – the 2017 capex program. Banks and investment funds ignored Gazprom’s request, fearing project uncertainty and US sanctions.

The investments associated with Turkish Stream this year, according to Gazprom, could soar from 41.9 to 91.9 billion rubles ($1.5 billion), yet it is difficult to measure adequate reflection in pipe-laying progress.

Until Lavrov’s recent remarks, Gazprom had persistently hammered the notion that Turkish stream should be considered a fait accompli, beyond EС’s reach, with the second line, including its onshore segment, a given. The Kremlin even indulged in propaganda bites that the pipe-laying vessel – Pioneering Spirit – has been laying the two lines in parallel, ignoring the legitimate hanging question on the demand for the second line and its point of entry into the EU gas system. Work on the second line would have added credibility behind Russia’s threat to bypass Ukraine and effectively shut down supply to South-East Europe via the Trans-Balkan pipeline.

Gazprom did not wait long after President Putin and Erdogan met at the end of September to confirm that it will spend 340 million euros to cover the costs of the onshore extension of Turkish stream in Turkey. The relevant joint-venture company that was created between Gazprom and Botas and Turkish Stream seemed irreversible.

A few facts: the initially announced overall cost of Turkish stream was about $7 billion, with the recent investment program review leading to a cost upgrade with the onshore part in Turkey. This is hardly the final tally. If one accounts for the funds already spent on South Stream, which Gazprom will amortize or write off as a loss, the money spent would easily fly over $5.6 billion, which is a staggering 400 billion rubles, judged against the 2018 projected budget deficit of 2 trillion rubles and the dramatic cuts in social spending, expenditure on culture, science and education. With the extreme fiscal constraints and capital shortage, pending new radical US sanctions after they come into force January 29th, whose impact according to a man that has first-hand knowledge of Kremlin’s finances – Alexei Kudrin – is grossly underestimated, Foreign Minister Sergei Lavrov, as the top image-maker and mine-sweeper for President Putin, had to admit the obvious – Russia can ill afford to pursue the reckless ‘we will fund everything’ policy line.

There is growing concern among former ministers, with Herman Gref and Alexei Kudrin sounding alarm, over Gazprom’s and Rosneft’s prodigality with shrinking national income, facing further trouble ahead of the new round of elections. As the two companies are under direct manual control of Putin – recent hard talk in Moscow has left many observers guessing whether the Kremlin has little space to maneuver before acknowledging the new red lines in grand project funding.

The Turkish Stream project originally envisaged the construction of two lines of a 15.75 billion cubic meter gas pipeline on the bottom of the Black Sea to Turkey. While a single line’s supply could be accommodated within the Turkish internal gas market demand, a second line makes sense only with a guaranteed access to the EU market, which is anything but certain.

The length of the offshore section of the gas pipeline is 937 km. Construction of the first line of the gas pipeline is expected to be completed in March 2018, the second in 2019, which seems questionable given the achieved pace. There is something strange when closely monitoring the work progress of the Pioneering Spirit pipe-laying vessel. In early September, Gazprom CEO Alexei Miller claimed that 220 km of the underwater part of the pipe had been laid along both strings since June 23, when President Putin officially gave an official kickoff of the pipe laying in the deep sea part of the Black Sea. This roughly represents 20% of the subsea section of Turkish Stream – done in three months. The daily progress was said to be 5 km, which if true, should have allowed the project to half the distance – yet it is far from that point, which implies that progress is moderate – at best.

Video of Vladimir Putin at the inauguration with key facts

The new map, released by Gazprom, with updated coordinates of the Pioneering Spirit, alongside Lavrov’s statement clearly states that the vessel is laying only a single line. The precondition set forth by the Russian foreign minister, i.e. legal guarantees from the EU, coincides with the third phase of the new US sanctions, which come into force January 29th and could particularly target North and Turkish streams, as well as the Power of Siberia gas pipeline, that Gazprom has to fund out of its own cashflow. “Given the unsuccessful experience with South Stream, Lavrov conferred, we will be ready to proceed to this work (the second line of the Turkish Stream-IV) only after obtaining solid legal guarantees from Brussels”.

Russian diplomacy has finally acknowledged that it is unable to secure in a bilateral pattern free passage for Russian gas into Southeast Europe via Turkish Stream. Although the new guidance issued by the US State Department on sanctions implementation clearly attests that sanctions on third parties working with Russian sanctioned institutions, companies or individuals would only concern projects started after August 2 – the day the law came into force – it is likely that the sanctions will touch upon the land extension of both Nord Stream-2 and Turkish Stream. This automatically renders the subsea second line in Turkish Stream obsolete.

Vedomosti quotes unnamed Gazprom sources who attest that almost 450 km of Turkish Stream have already been laid, which if true, would mean that work is done on two lines, which contradict Lavrov’s statement. A quick check with the MarineTraffic.com today, when it was claimed that the vessel has entered the exclusive economic zone of Turkey, locates the pipe-laying vessel Pioneering Spirit at only 240 km from its onshore exit point on the Russian coastline, almost where Alexei Miller claimed that Pioneering spirit was in early September. In understanding the true progress of Turkish stream, these controversies imply a difficult, sobering and somewhat painful process at Gazprom HQ of reconciling geopolitical ambitions with market realities and constraints the company has to live with.

Moreover, next year the overall debt of $45 billion will peak in annual repayments at a record level of $11.7 billion, which will inevitably force Gazprom to prioritize and cut investment programs.

Following the pangs of humbleness in Moscow, all preliminary arrangements in Greece, Bulgaria, Serbia and Hungary to extend Turkish Stream gas flows into the EU would become redundant.

Although it is unlikely that a single line of Turkish stream will be built to completion, this would hardly happen on time or translate into a particular accomplishment if it were to occur – a far cry from the original dream of the Kremlin.