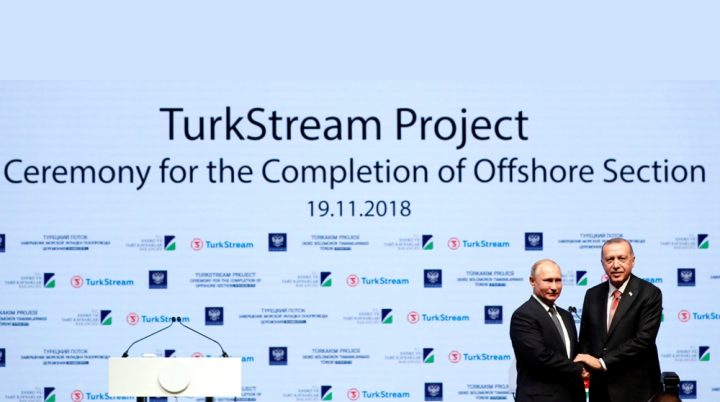 The consequences of the choices the Bulgarian government makes on the scale and direction of the infrastructure upgrade to accommodate future flows it intends to service will be long-term. The issue at stake is whether the country will become a fully integrated member of the EU gas market, implementing key elements of the EU’s gas strategy and North-South – the Baltic to the Aegean Sea – interconnectedness, or replay the old adage of acting as proxy to Gazprom gas in the EU.

The crisis in the Sea of Azov and the Kerch Strait, among other alerts and triggers, echoes a repetitive soundbite in Russian foreign policy – Ukraine should not be trusted as a transit country, thereby Russia’s circumvention ‘streams’ serve the EU’s best interest. There is little doubt that Moscow sets the tone and calls the the time for escalation of tension between the two countries. Until recently, Ukrainian Navy warships had traversed the Kerch Strait without prior notification and explicit permission, as provided for in the 2003 bilateral treaty for joint use of the Kerch Strait and the Sea of Azov.

What made Putin move now?

Every time the Russian President undertakes an attack, defying international law, there is an underlying geopolitical and business current with preplanned specific gains and monetary returns, mostly for his close oligarchic cabal. Putin’s pincer game against Ukraine, embodied with the Nord Stream-2 and TurkStream-2 pipelines, has come to a decisive turn – tens of billions of dollars have been spent to stifle his neighbor, yet there is no clear winning position on the chessboard. Sanctions are piling up, and the odds are against the Kremlin’s wishes, both at home and in the international arena. Chancellor Merkel has been unable to convince Europeans that the Nord Stream-2 will not dry transit via Ukraine, notably after Gazexport served a formal notice to Bulgartransgaz that it will cease using Ukraine’s transit system to supply Bulgaria and Greece. The Russian leader needs more time to up the stakes while stirring trouble in the West, in the hope that Ukraine will succumb to the pressure and provide him with a Georgia-type excuse. He is looking for another ideal scenario to unleash a major military conflict with Ukraine, allowing him to reverse the erosion of Russian imperial power in the post-Soviet space.

Let’s go back to the Bulgarian choices – where to bet our money in gas diplomacy. The choice Bulgaria faces today might overwhelm our capacity to understand the implications, the cost-benefit fallout, the geopolitical and practical consequences. Providing exclusive routes for Russian gas into the EU, while failing to accommodate current and future interest in the form of emerging new players in the Southern Gas Corridor and the LNG market will certainly come back to haunt us. What Russia wants to achieve is clear – by fully engaging transit capacities in Bulgaria and flooding the market with Russian gas, it seeks to deny competitors entry in the Central and East European gas market via Bulgaria’s transit system.

Should the Bulgarian government decide to spend this staggering budget of Euro 1.65 billion via the TSO – Bulgartransgaz – on securing primarily export routes for Gazprom to Serbia via East-West expansion of transit capacities, it will concurrently deny equal access and transit capacities for the South- North gas corridor, as diversification will remain a distant mirage. If today large-scale Bulgarian state energy companies are pre-occupied – time and resource wise – with Gazprom business, Russia’s grip on the regional gas market will remain unfettered in the future. Bulgartransgaz is choosing to offer the full technical capacity of almost 55 million cubic meters/d/y on the key section – CS Strandja–CS Provadia –  in reverse mode in the third and final binding stage of the market test, as stated on the company’s web page. 90% of the capacity would be allocated on a long-term contractual base under terms that remain a top state secret. Given the fact that alternatives are just emerging, mostly in a nascent state, unable to compete and engage on long-term basis capacities at such an early stage of the opening of the Bulgarian and the regional market, early booking of the capacity by Gazexport, either in its name or in tandem with proxy partners, will preordain the future market moves, fixing the status quo and virtually sealing off the national gas market. Bulgaria’s TSO should carefully balance short and long-term objectives, and instead of supporting the incumbent monopolist, encourage newcomers and competitors to Gazprom.

While making decisions today that will affect our future options, we must accommodate traders and shippers of gas from potential new sources and account for LNG terminals and the new pipeline to East Med Greece.

We should jointly develop long-term transmission system plans that integrate tariffs and services with the TSOs in our neighborhood, resulting in the offering of integrated products and synchronized capacity upgrade in the national transmission grids and transit systems of Bulgaria, Greece, Romania, Serbia etc.

The Interconnector Greece-Bulgaria plays a crucial role as it provides the only dedicated entry point into Bulgaria’s gas transport system that does not feature Russian gas and is purposely developed and supported by the EC for alternative supplies and diversification.

What are the sensitive areas that affect the IGB project?

First, the interconnector will enter the national gas transmission grid, not the transit system. Although the counterpart is BTG, which operates both, there are differences in exit-entry access, capacity allocation and pressures. This should be explicitly cleared.

Secondly, there is a serious risk of blocking the reverse flow potential of the Trans-Balkan pipeline between CS Lozenetz and CS Provadia, and thereafter the exit via Kardam-Negru Voda northward, if the preceding section of the Trans Balkan gas pipeline between CS Malkoclar and CS Strandja is fully booked and blocked for long-term servicing of TurkishStream. This will substantially undercut IGB’s ability to offer integrated product for clients from/to Komotini from/to the Romanian border via the Trans-Balkan pipeline route from/to Ukraine, Moldova, Slovakia, Hungary and thereafter.

The two gas corridors emerging and imperiled by such developments are as follows:

The potential for transit services using the Bulgarian gas transit system is at par with whatever Gazprom can provide – both in terms of volumes and revenue generation potential.

The choices Bulgaria is facing today are not just geopolitical, although these loom high and can’t be ignored or second rated. The Damocles sword of U.S. sanctions is still hanging over the fate of both streams – the Nord and the light version of the South Stream – the extension of TurkStream. The implications are both economic, financial and ultimately existential regarding the role the country plays for the regional and EU gas markets.

New players in the regional market still face hurdles in securing competitive and integrated tariffs that will allow traders to ship gas from the Southern Corridor to the Romanian, Serbian and Ukrainian borders and compete with Russian gas.

Existing interconnectors, due to low capacities and exclusive arrangements with Gazexport, do not present a realistic option for its competitors to trade gas and provide alternatives to consumers. Insufficient gas storage capacities and lack of trading platforms further undermine the pretense of the country as a genuine gas hub.

TSOs must be neutral to ‘streams’, companies and entry and exit points.

Attempts to bypass TPA restrictions, presenting part of the Russian gas from TurkStream as third-party gas via swap deals will not help, as long as the capacities are blocked and Gazexport retains the ultimate control.

Attempts to further delay the IGB are almost certain, given the lack of reaction to previous phony complaints that have already caused a substantial delay in the project schedule. Most of the complainants are associated with companies related to Russian business interests in Bulgaria. This is nothing new, as most of the tricks were used to block progress of the Nabucco project.

Whether the government admits it or not, the gravity of past dependences still shapes the mindset of managers of state energy companies, undermining a very real chance of converting the geostrategic location of Bulgaria into tangible benefits and business proceeds, while providing transit services to a greater number of competing suppliers from different sources and differed routes, leading to optimal supply terms for Bulgarian and regional gas consumers.