Menu
Home
2018
December
30
The Region
Compromise needed for a Serbia-Kosovo deal, but will either side budge?

Compromise needed for a Serbia-Kosovo deal, but will either side budge? 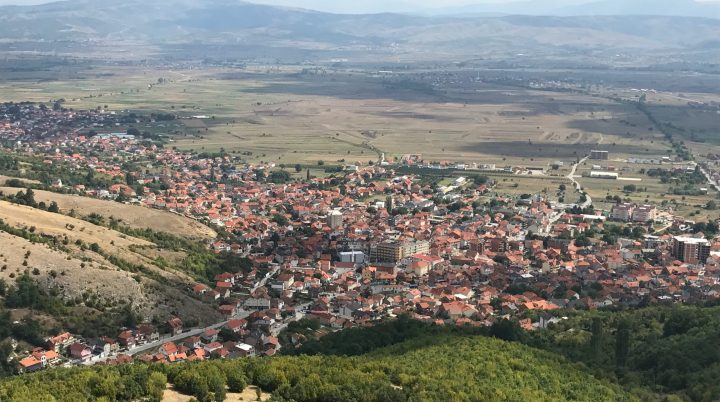 2018 was supposed to be a year in which Serbia and Kosovo made progress in resolving their longstanding territorial dispute. This year, the European Union moderated more dialogue between Belgrade and Pristina, or at least tried to, and set a target date of 2025 for Serbia to join the bloc, an accession that hinges on Serbia striking a deal with Kosovo on normalizing relations. Additionally, a major breakthrough occurred in the middle of the year in another longstanding dispute in the region, the Macedonia name dispute, giving hope that similar progress may occur in Serbia-Kosovo relations.

Yet, 2018 is concluding with Pristina imposing and hiking tariffs on imports from Serbia (and from Bosnia) and voting to turn the Kosovo Security Force into a regular army. Meanwhile, Belgrade is increasing its military budget, and Serbian President Aleksandar Vucic is saying no force in the world will bring him back to the negotiating table until Pristina drops its tariffs.

“There’s no force in the world, not a man in the world who can make me talk about anything until the taxes are withdrawn. Not even Trump’s personal call,” Vucic was quoted by Bloomberg News as saying this weekend.

Additionally, 2018 was a year of flareups of tension and provocative encounters — something that is not out of the ordinary, yet no sign of progress. Kosovo police arrested a Serbian politician, Marko Djuric, who is the head of Serbia’s office for Kosovo. Likewise, Vucic tried visiting Serbs deep inside Kosovo, and Kosovo President Hashim Thaci traveled into a Serb area in the north of Kosovo amid a spike in tensions.

Tensions also rose this year over a proposal put forth by both Vucic and Thaci for a land swap in which some territory in Southern Serbia, largely inhabited by ethnic Albanians, would be swapped for some territory in Northern Kosovo that is predominantly inhabited by Serbs. Coincidentally, this was one of the only, if not the only, time this year the two presidents discussed making concessions to the other side.

At this point, it seems Pristina has a stronger hand with which to negotiate than Belgrade. But both sides could make concessions. Here are some possibilities:

First off, Pristina could drop the tariffs which, though billed as a response to Belgrade blocking Kosovo’s membership in UNESCO, may actually amount to Kosovo giving itself a bargaining chip. Pristina could also backtrack on the formation of an army, and it could make good on an EU-brokered agreement that calls for the formation of an association of Serb municipalities in Kosovo, something that many Albanians oppose.

Aside from giving up its demand for formal recognition — an unrealistic expectation — just about the largest concession Pristina could make would be relinquishing Serb-dominated North Kosovo to Serbia as part of a land swap.

Belgrade doesn’t have quite the negotiating chips that Pristina has. Belgrade could pressure the Kosovo Serbs to integrate more into the Pristina-run political system in Kosovo, rather than executing boycotts, as often occurs. Serbia could give up its demand that the United Nations mission stay in Kosovo. It could also halt its campaign against Kosovo’s membership in certain international bodies, like UNESCO. However, the more international bodies grant Kosovo membership the closer Pristina gets to achieving formal recognition and obtaining UN membership.

A land swap is also a possibility for Belgrade. Serbia could give up part or all of the Presevo Valley. However, this chip is not as valuable to Belgrade as the north of Kosovo is to Pristina. An Albanian-dominated area in the far south of Serbia does not have nearly as much importance to Serbians as the north of Kosovo has to most Kosovo Albanians.

Talk of a land swap has garnered mixed reactions from members of the international community, with some offering support for the idea and others criticizing it. The major concern expressed by critics is that a land swap would fuel other efforts to redraw Balkan borders along ethnic lines, with Bosnia’s Republika Srpska being of particular concern due to the separatist aims of Bosnian Serb leader Milorad Dodik.

However, in the case of an actual land swap between Serbia and Kosovo, Vucic could agree to oppose Dodik’s territorial ambitions. Likewise, the existing NATO presence in the region could dissuade secessionists from using force in attempt to redraw borders.

If an exchange of territory were to occur, it would not be a totally clean swap along ethnic lines. The city of Presevo in the far south of Serbia is almost entirely Albanian, but the Presevo Valley, as a whole, has a more mixed population that includes Serbs and some non-Albanian minorities. Likewise, the area of Kosovo located north of the Ibar River, albeit mostly Serb, does have some Albanian inhabitants.

A further downside to a potential land swap could be that it would likely result in the physical division of Mitrovica, Kosovo. Mitrovica is effectively a divided city, with the Albanian South and Serb North functioning as different municipalities and there being a history of violent clashes on a bridge over the Ibar River that connects the two sides. However, EU-funded efforts to quell the tensions appear to be working to some degree. For instance, Serbian can increasingly be heard spoken on the Albanian side, and an EU outreach office has actually opened on the Serbian side of Mitrovica, an area known for anti-western sentiments.

There could be considerable upside to a land swap. Vucic could sell it as a political victory in similar fashion as Russian President Vladimir Putin did with Moscow’s annexation of Crimea. That could possibly give Vucic justification for signing a normalization deal that de facto or even outright recognizes Kosovo’s independence.

It is difficult to tell whether this year’s land swap talk was a genuine proposal or just political maneuvering, or even a stunt, by Vucic and Thaci. Both leaders are often accused of stoking tensions to maintain political support and stay in power.

To the south, Athens and Skopje reached a landmark deal earlier this year on changing the name of Macedonia to North Macedonia in order to get Greece to drop its veto on its northern neighbor’s accession to NATO and eventually the EU. The deal was agreed upon by an overtly pro-western government in Skopje and a government in Athens led by Prime Minister Alexis Tsipras, who has transformed politically from being a thorn in the EU’s side to someone attempting to be problem solver in the region. Despite the Euro-Atlantic orientation of the current Greek and Macedonian governments, the deal is yet to be ratified and has been faced with strong domestic opposition in both countries.

In the case of Serbia and Kosovo, similar opposition to a potential deal can be expected if significant concessions are made by one or both sides. The talk of a potential land swap prompted a large protest in Pristina this year, as most Albanians appear to be against the proposal. Even Kosovo Prime Minister Ramush Haradinaj took a stance against a potential exchange of territory with Serbia. In general, Albanians in Kosovo oppose making large concessions to Serbia and demand outright recognition.

And whereas it took a pair of cooperative, pro-western leaders to reach a deal on the Macedonia name dispute, the current Serbian and Kosovo leaders — Vucic and Thaci — are quite nationalistic and combative.

Vucic is only nominally pro-western, as he regularly makes trips to Moscow and strike deals with Putin on matters such as the delivery of Russian arms to Serbia. Critics accuse Vucic of putting on different faces for different audiences. Some believe that when push comes to shove, he will choose EU integration, even if that means recognizing Kosovo to some degree.

Thaci, who is pro-western, is a former Kosovo Liberation Army leader. He is dealing with a potential war crimes indictment, as well as domestic opposition that is not keen on compromise with Serbia and increasingly at odds with western institutions’ handling of Kosovo’s disputes with its neighbors.

Still, a lot is riding on a potential deal between Belgrade and Pristina. The EU has tabbed Serbia, along with Montenegro, as next in line for membership in the bloc. The EU candidacies of Albania, Macedonia, Bosnia and Kosovo all lag behind Serbia’s. If Belgrade and Pristina fail to reach a deal in a timely manner, EU expansion in the region could get derailed or dragged out to a pace even slower than it currently is. That would afford other actors in the region — namely Russia, Turkey and China —more opportunity to exert influence in the Balkans.