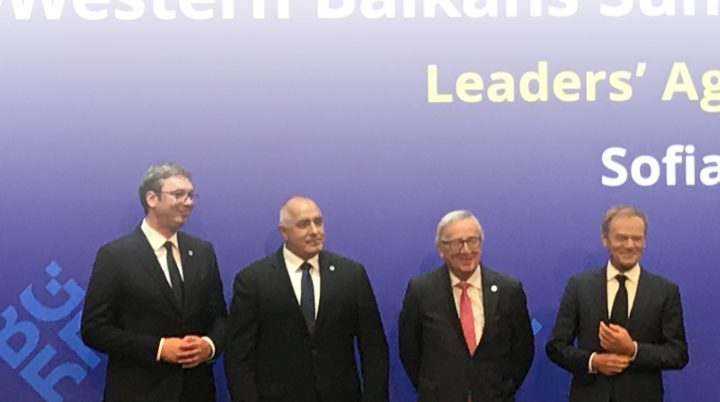 The ratification of the Macedonia name deal between Athens and Skopje on Friday capped a year in which the West renewed its focus on integrating the Western Balkans into the Euro-Atlantic community.

Bulgaria factored into the renewed push to integrate the region into NATO and the EU because Sofia made Western Balkan integration a focal point of its European Council presidency that spanned the first half of 2018. Sofia capped its EU presidency by hosting the EU-Western Balkans summit last May. The summit was a high-level gathering of EU and Western Balkan leaders, the first of its kind in 15 years.

Now that 2018 is complete and the Macedonia name dispute has been settled, one can have a clearer look at the fruits of Bulgaria’s push to make Western Balkan integration an EU priority. Ironically, in bringing Western Balkan integration to the forefront of the EU agenda, Sofia revealed Brussels’ apathy for the issue. Likewise, a summit about EU expansion ended up highlighting fractured ties among western allies.

In various ways, the Western Balkans summit foreshadowed what was to come in the remaining months of 2018 and the beginning of 2019.

The prime ministers of Greece and now-North Macedonia, Alexis Tsipras and Zoran Zaev, were acting like close friends, posing together for a photo-op and vowing to resolve the name dispute that was blocking Skopje’s potential NATO and EU membership.

Indeed, Tsipras and Zaev delivered the Macedonia name agreement according to schedule and then managed to navigate very challenging domestic situations to get the deal ratified. In this instance, a handshake in front of the cameras was a sign of a coming breakthrough in Euro-Atlantic integration.

The leaders involved in the other major Western Balkan dispute, the one between Serbia and Kosovo, behaved much differently at the Sofia summit. The presidents of Serbia and Kosovo, Aleksandar Vucic and Hashim Thaci, largely stayed away from one another in public, with the notable exception of when they shook hands — almost inadvertently — after being brought on stage together with other Western Balkan leaders for the signing of infrastructure agreements. Serbian Prime Minister Ana Brnabic, who gave a press conference at the summit, insisted Belgrade would not recognize Kosovo’s independence.

For Serbia and Kosovo, the remainder of 2018 was not so much characterized by renewed dialogue, as it was by constant bickering and moves by Pristina to create an army and to impose tariffs on Serbian and Bosnian imports. Little, if any, progress has since been made in resolving the Serbia-Kosovo dispute.

The remarks and attitudes of EU leaders at the summit were similarly foreshadowing. As for the EU’s top brass, they walked in and out of the Western Balkans summit talking about U.S. President Donald Trump and Iran — and basically siding with the latter of the two. European Council President Donald Tusk had plenty to say about Trump pulling the U.S. out of the Iran nuclear deal.

“With friends like that who needs enemies?” Tusk said of Trump.

Tusk and European Commission President Jean-Claude Juncker also spoke at length about EU-U.S. trade relations. When they did discuss the Western Balkans, Tusk and Juncker paid lip service to integration of the region being a top priority for the EU, while refraining from making any membership promises.

Bulgarian Prime Minister Boyko Borissov, who was the host of the summit, spoke at much more length about the Balkans. At one point, though, Borissov’s remarks veered away from the theme of EU integration and toward what some might characterize as appeasement of competing powers in the region. At the Vienna Economic Forum, held in Sofia following the conclusion of the summit, Borissov spoke about the importance of Turkey and Russia in the Balkans, particularly for the Balkan Muslim and Orthodox communities respectively.

“Not only is Turkey important. Also Russia is important for the Balkans,” Borissov said. “We should not confront them. We should be bridges of partnerships with these countries.” What followed in the Balkans right after the summit?

Two days after Borissov made those remarks, Turkish President Recep Tayyip Erdogan held a campaign rally in Sarajevo, Bosnia, in defiance of EU states that banned him and at the invitation of one of the Western Balkan leaders present at the summit, Bakir Izetbegovic. No one spoke publicly at the summit about Erdogan’s rally, which ended up bringing thousands of Turks and Muslims to Sarajevo. Most of the Turks and Muslims who attended the rally came from EU member states or Western Balkan countries, including Serbia.

The following month, the southern Serbian city of Novi Pazar, which is home to many Muslims, held a rally supporting Erdogan. Then, earlier this month, thousands of Serbs flooded the streets of Belgrade to welcome Russian President Vladimir Putin. Both Erdogan and Putin received hero’s welcomes and were effectively greeted as saviors during these recent Balkan visits.

One step forward, but then what?

The Macedonia name deal was a major breakthrough for the Euro-Atlantic integration of the Western Balkans — something for which the EU, and to a lesser extent Bulgaria, are deserving of credit. With North Macedonia’s admission to NATO, the western alliance will effectively control the entire region, with the exception of Serbia, which is now encircled, and Bosnia, which could possibly join NATO.

EU accession in the region is progressing, but at a snail’s pace. And in large part, Western Balkan membership in the EU hinges on Serbia and Kosovo striking a deal and ending their dispute. Meanwhile, competing influences are not going away.

Bulgaria is pursuing a potential extension of Russia’s new Turk Stream pipeline, one of Moscow’s two ongoing projects intended to bypass Ukraine while making gas deliveries to Europe. While hosting Putin earlier this month, Serbia’s Vucic made it clear he wants the pipeline to extend across Serbian territory. Vucic also suggested Belgrade has no reasonable alternative to Russian gas.

Erdogan’s Turkey, meanwhile, is pursuing a Neo-Ottoman agenda. Turkey is constructing mosques in the Balkans, such as one in Tirana that is now the largest on the peninsula. Likewise, Ankara is exerting influence through renovating Ottoman monuments and funding Turkish and Muslim cultural projects. Erdogan and other Turkish politicians have even expressed ambitions to reclaim territories, such as the Greek islands.

As for the Euro-Atlantic world as a whole, the EU-Western Balkans summit may have been a sign of things to come. Fractures in the ties among western allies were on full display last May in Sofia. One journalist who spoke during the final press conference of the summit made a telling remark.

“It is kind of surreal, isn’t it, to see Europe cooperating with Iran?” the journalist said while addressing Tusk and Juncker. “And now you have issues with the United States, a long-term ally.”

Even with Trump in the White House, the U.S. is not preparing to pull out of NATO. Europe, however, is now trying to create a continental army. While many observers speculate about Trump’s commitment to NATO, there is also reason to question Europe’s commitment to the alliance.

Regarding the EU, the United Kingdom is pulling out of the union, or at least has expressed its intention to do so. Additionally, the union has clear east-west divides on issues like defense, energy and migration.

So as NATO and the EU expand in the Western Balkans, one might wonder whether they will remain robust enough to refrain from simultaneously losing members.